The project team asked me if I’d like to do the write-up the weekend before the third Reality Librarianship talk featuring Paul Hayton. I had to laugh as I had every expectation that I’d hear very little of Paul and Megan’s discussion. 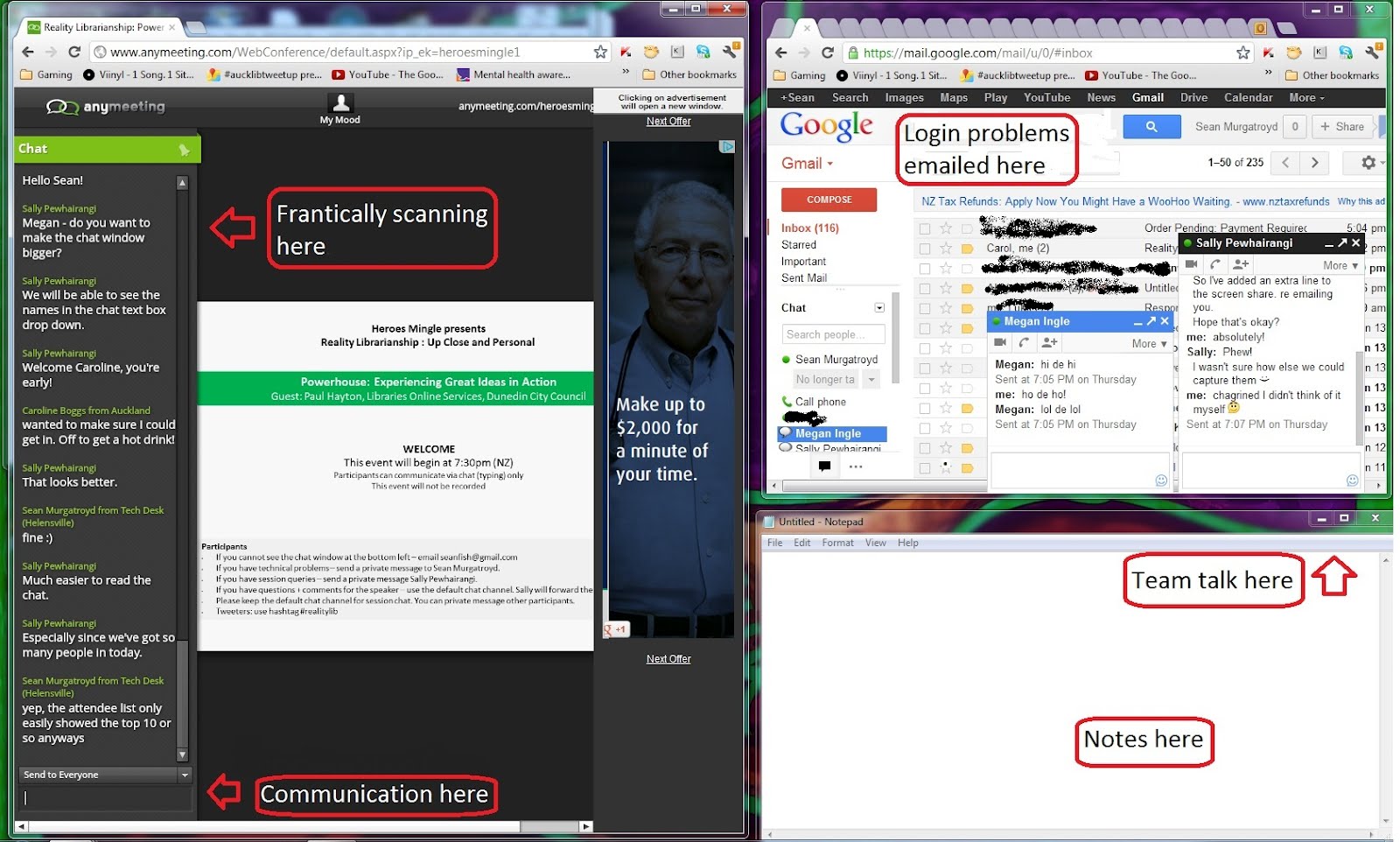 Above are the information sources I needed to track on the night, plus the audio, which I was listening to for sound quality primarily and for content as a distant second. Which of these juggling balls could I drop? The one not related to tech support? We’ll see. I did take notes.

I’ve logged on. Megan and Sally have come up with the great idea, occasionally addressing the crowd to set the mood. I use these occasional greetings as an opportunity to find if anybody is having problems with sound. Things are going pretty smoothly.

Paul arrives, and leaps right into the chat… the presenters say hi, pause and then Paul says, “Well this is awkward. How was your day?” A short but pleasant conversation ensues.

Paul excuses himself – and mutes microphone while away. The tech support approves greatly.

After a little chat amongst the growing audience, Paul returns – with music! I resolve to steal his idea.

We’re getting close now – numbers are rising. Discussion of the music is providing me an automatic check for people with sound problems. None are reported. I pick up a couple of other problems from the main discussion.

Paul frames his talk by referring to Paul Reynolds’ No Numpties Scholarship. He was the 2011 recipient, and secured a two week internship at the Powerhouse Museum.

Paul discusses some of history behind his choice, which involved ALIA. Regrettably monitoring chat is affecting my focus. Thankfully Paul drops in a link!!! Oh wait, it’s a picture of the museum sign.

Maybe this next link (after resolving sundry problems) of the musem’sorganisation chart will help. I found it interesting. Paul was based in the web and social technologies team, a part of Digital, Social and Emerging Technologies.

Suddenly Sally goes offline. I have to support the social side of the chat while she recovers, and I lose track of the talk for note taking purposes at least. I nabbed this nice picture of a lab at least.Yum!

After a little cogitating I tell Megan Sally is offline. The concern is that Sally has a list of questions garnered from the text chat that I don’t have access to. Paul is putting his former radio host skills into action, and Megan and I agree to both relax and let him run things.

I have no idea what’s happening here. I heard Paul say something about kids doing a mashup?

Sally is back on. We negotiate handover of role.

Paul talks about an Australian Registry and linked to an open data project? I have no idea.

His summing up: The two week internship was good. A few days is a whirl, that length gave him time to think and talk, which was invaluable.

After the fact I noted the unusual number of sound problems, which were possibly to do with an upgrade to the Flash software that underpinned our meeting spaces.

More discussion on the night can be found at Paul’s forums.